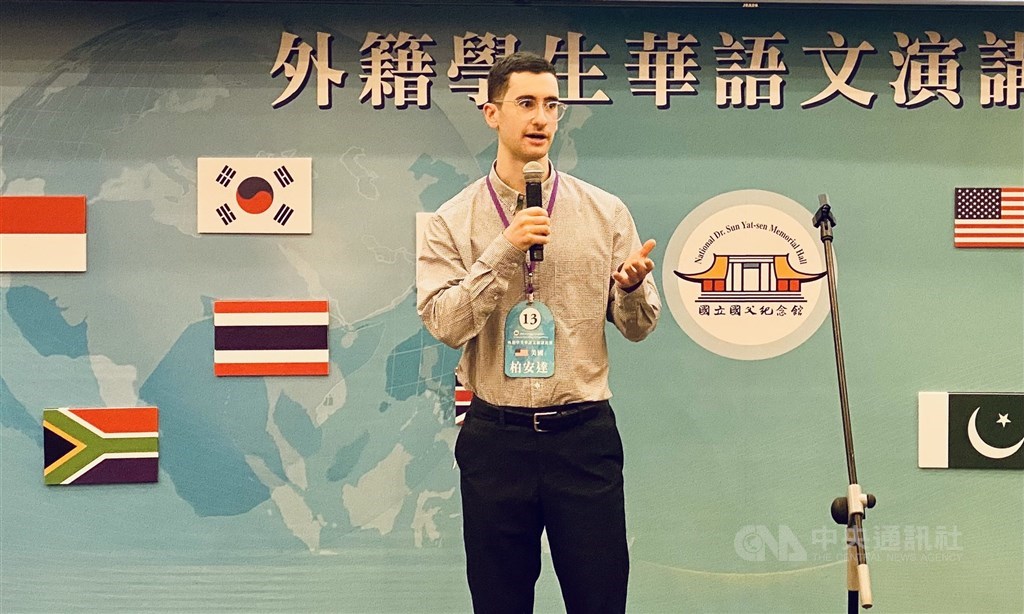 Taipei, November 16 (CNA) A student from the United States on Tuesday won first prize in a Mandarin speaking competition in Taipei, in which participants, all of foreign nationality, described their experiences in Taiwan or shared other personal views.

Adam Boxer, one of 33 nominees and an economics and Mandarin student at Swarthmore College in Pennsylvania, won the top prize with his commentary on a news article about COVID-19.

In his review, Boxer expressed his thoughts on the story, which was published in The Economist and projected how the COVID-19 pandemic might end, based on other pandemics in the past.

The 21-year-old American told CNA he arrived in Taiwan on September 20, is currently enrolled in the international Chinese language program at National Taiwan University and will return to the United States. United at the end of the semester.

“I was very lucky that in my school district in Wallingford, Pa., They started offering Chinese when I entered college,” he said. “So I started in college, I continued through high school, and I continue in college, and I really love learning the language.”

Boxer said learning Chinese is important to him because he enjoys meeting different people, and he believes the language itself is an integral part of the world today.

The 49th edition of the competition was organized by the National Dr Sun Yat-sen Memorial Hall to promote learning Chinese and showcase the beauty of Mandarin, according to Wang Lan-sheng (王蘭生), general manager of the Memorial Hall. .

The contestants, from 13 countries, used powerful body language, songs and props to liven up their speeches.

Tsering Tharchin, a Tibetan student who won NT $ 16,000 second prize, spoke about what he learned during the COVID-19 pandemic, and he used a mirror to demonstrate his main point that by choosing the right angle, one can reflect optimism and kindness against all odds.

Tsering, 35, said he has been studying Mandarin at Taiwan Normal University for two years and three months.

Born in Tibet, he fled to India at the age of 12, Tsering said, adding that he was a Tibetan in exile.

“Since Tibet was under the control of China, when I was little, I learned a little pinyin, but after fleeing to India, I totally forgot it”, he said. declared. “When I was in college, I was interested in studying China, international relations, and politics, so I thought learning Chinese was very important.”

Tsering said Taiwan provided him with a safe haven and an ideal environment to study Mandarin Chinese.

Chen Yan-hao (陳彥豪), a professor in the Department of Foreign Languages ​​and Applied Linguistics at National Taipei University, said after the competition that many candidates used good Mandarin vocabulary in their speeches.

Unlocking the potential of data in the public sector