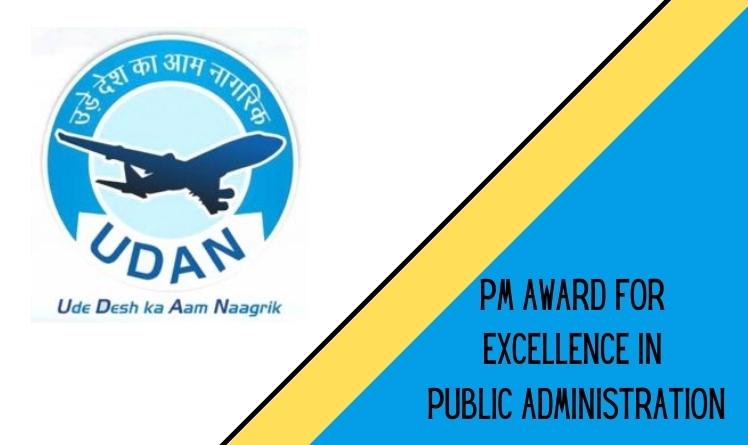 New Delhi: The Ministry of Civil Aviation (MoCA) Regional Connectivity Flagship Program UDAN (UdeDeshkaAamNagrik) has been shortlisted for the Prime Minister’s Award for Excellence in Public Administration 2020 in the category “Innovation (General) – Central”.

The Government of India has launched this award to acknowledge, recognize and reward the extraordinary and innovative work done by the districts and state/government organizations. This program emphasizes good governance, qualitative achievements and last-mile connectivity rather than the achievement of quantitative targets alone. The prize consists of a trophy, a scroll and a bounty of Rs 10 lakhs.

Launched in 2016, the UDAN program aims to meet the aspirations of the ordinary man by following the vision of Ude Deshka Aam Nagrik,with improved aviation infrastructure and air connectivity in Tier II and III cities.

In a short period of 5 years, today 415 UDAN routes connect 66 underserved/unserved airports, including heliports and water aerodromes, and over 92 million people have benefited. More than 1 lakh 79,000 flights have been conducted under this program. The UDAN program has greatly benefited several pan-India sectors including Hilly States, North Eastern Region and Islands

UDAN is having a positive impact on the country’s economy and has witnessed an excellent response from industry stakeholders, especially airline operators and state governments. More than 350 new city pairs are now to be connected under the program, of which 200 are already connected and are widely distributed geographically, providing connectivity across the length and breadth of the country and ensuring balanced regional growth driving growth economy and jobs for local communities. population.

The program has also led to the development of new Green Field airports such as Pakyong near Gangtok in Sikkim, Tezu in Arunachal Pradesh and Kurnool in Andhra Pradesh. The program also resulted in an additional 5% growth in domestic passenger share at non-metro airports.

The Ministry of Civil Aviation is planning and committing to build 100 new airports by 2024 in India with 1,000 new routes under the UDAN RCS program by 2026.