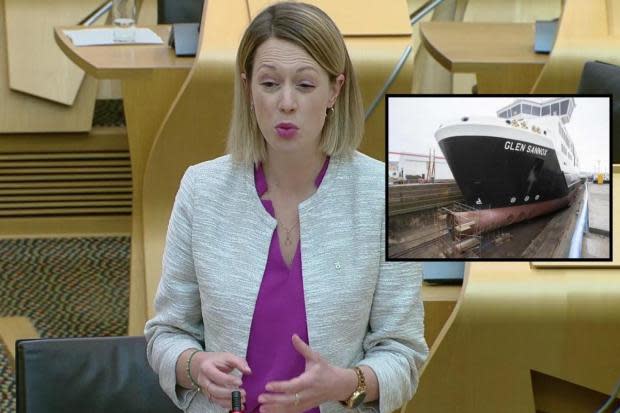 GOING shopping in the day was really a chore.

Fighting through crowds to buy a TV or clothes was never much fun, and even worse when you had to find the receipt after finding out it didn’t work and you had to take it back.

Now, with the advent of the global web, shopping is so much easier that you can get anything you want by simply browsing your phone followed by an email with your proof of purchase.

In fact, online shopping has become so convenient that the Scottish government seems to have adopted it for large public procurement projects.

The events of this week have taught us that disgraced elders finance secretary Derek Mackay actually purchased two new ferries from Ferguson Marine via email.

The only problem after that is that the government then lost the receipt, which got them in trouble with the finance watchdogs.

Audit Scotlandnot without reason, wanted to see the official documentation used to justify the decision to award the contract to the Port Glasgow shipyard which had not submitted the cheapest offer.

Like a schoolboy pretending the dog had eaten his homework, the ministers collectively put their hands in their pockets, looked at their shoes and mumbled that they couldn’t find him.

Auditor General Stephen Boyle, who first noted the missing documents, was not happy and gave the government a stern look and politely asked them to find them.

Help duly arrived on Wednesday when underway Transportation Secretary Jenny Gilruth arrived at Holyrood on her trusted mount and proclaimed the missing email had been found at the 11th hour.

But report utter disregard in the chamber when it was revealed to be a one-line email that Derek Mackay had approved the deal so he could proceed.

More than six years later, the ferries remain unbuilt at Fergusons and are now three years behind schedule and the cost has risen to £240million.

If only the disgraced Derek, the convenient scapegoat, had kept the receipt, he could have gone back to the store and exchanged the ferries for new ones, but those are the dangers of shopping online, I guess.

It has really not been a good week for portraying the public sector as a well-oiled machine.

An inquest this week found that avoidable delays in isolating an elderly Covid patient may have sparked virus outbreaks at a hospital in Lanarkshire.

An internal review found the man – who tested negative when presented to A&E on December 27, 2021 following a fall and head injury – did not receive a follow-up swab as it should have been on the fifth day.

When a test was finally carried out on day 10 of his hospital stay, by which time he had been moved to a second ward, the positive result was missed for three more days as it was reported at 6.30pm on a Friday when the Infection Prevention and Control (IPC) staff had finished for the weekend.

During the week, the IPC team would be informed of any positive results between 8:30 a.m. and 4:30 p.m. Monday to Friday, and alert the relevant department, but investigators found that there was “no clear process for communicating positive Covid swab results after [4.30pm] on a Friday”.

Think about it for a second and digest it.

A large Scottish hospital had no infection and control staff working past 4.30pm Monday to Friday without any cover over the weekend.

This during a pandemic and all this at a time when everyone was staying home to protect the NHS.

It’s just a good thing that Covid is afraid of the dark and taking its weekends off, otherwise thousands of patients could have caught the virus while in hospital for other ailments and made the crisis worse.

Unfortunately, both events highlight a sense of entitlement and convenience among many senior executives working in public services, which is perhaps the main reason so many of them fail.

Imagine if the emergency services all clocked in at 4:30 p.m. Monday through Friday?

Weekend work is a necessity in many jobs these days and should be especially so in those that exist to serve the public, who after all pay their wages.

There are many thousands of hardworking employees in the public sector who do great work and work overtime, only to be constantly dismissed by managers who don’t seem to care about the public they are supposed to serve.