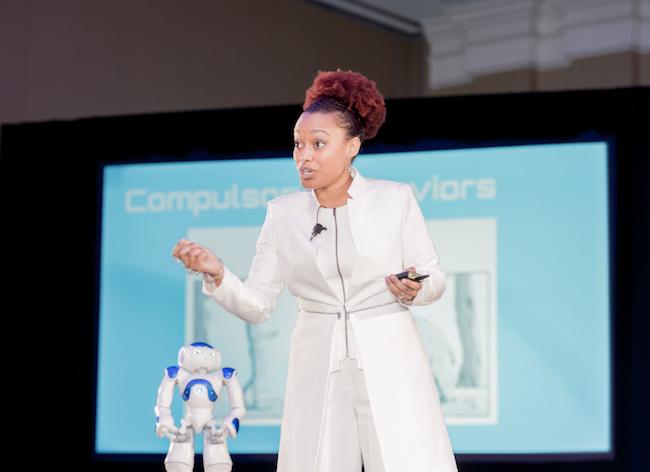 The days of an hour-long keynote speech from a motivational speaker may be long gone.

At the National Speaker Association’s winter conference, the theme “The Future of Speech” invited images of holograms and robots. While at least one robot has arrived on the scene, the content has instead focused primarily on an industry that listens and learns from its audience.

Clarity of ideas, engagement with the conference audience and, of course, technology were the main threads.

Clarity of ideas: be perfectly clear with your content

It’s not enough to be motivational “rah-rah,” according to former TEDxCambridge producer Tamsen Webster. Webster says, “TED has changed people’s expectations of what’s possible in a short time. In its story, TED raised the bar on the clarity of our ideas to become effective communicators.

Webster says there is a big difference between having an idea and having “clarity of idea”. She takes the example of charades. Putting her arms above her head at a point, she said, “You might think to yourself, ‘I’m nailing the Eiffel Tower,’ but then I say, ‘What are you, a pencil? ?’ [The audience] can’t know what you know.

Webster continues, “Until it’s clear to you, the audience, it doesn’t matter how clear it is to me, the speaker.” She sees a speaker’s job as breaking the idea down into small enough parts to reconstruct the pieces of the idea in other people’s heads.

Even for people like professors and lecturers, who spend much of their days presenting their ideas, she says it’s a challenge to summarize them in the 3 to 18 minutes required for a TED-style format. That’s the benefit of these short speeches – developing that level of clarity about your own idea.

According to Webster, the future of public speaking is being able to know your idea well enough that I can say “Tell it to me in 30 seconds, 30 minutes, or 3 days”, and you have the flexibility to adjust or “accordion” your idea. It only works if you have that high level of clarity.

Danielle Côté is vice-president of event marketing for Sage, an accounting and business management software. In this role, she and her team organize around 50 events a year. During a panel of conference professionals and meeting planners, she told the audience, “Even the word ‘speaker’ is outdated; I am looking for a partnership to think about ways of applied learning. »

When Cote hires for an event, she wants speakers to demonstrate an interest in her audience by asking questions about the conference’s goals and what’s important to attendees.

Rather than relying on speakers’ bureaus, which specialize in helping meeting planners hire the right speaker, Cote instead sources speakers by attending local conferences in the area where she’s hosting her next event and speaking to colleagues about their experiences.

While people in the industry used to “expect speakers to fly around in capes and land on stage”, Cote wants speakers who work closely with the conference, provide materials to the audience and engage before and after via social media and targeted marketing.

Like Cote, Nancy Vogl sees her work as people-oriented. After launching his speakers bureau more than 25 years ago, Vogl says, “The world is crying out for a return to the meaningful service that was the norm.

She explains: “If I really pay attention and listen to what problem [my client] wants to solve – which is the most important – then I will offer them the best speaker options to consider. Building the right speaker-audience relationship is so important to her that she laughs, “I’m just as excited to book a high-profile celebrity at a global conference for a six-figure amount as I’m booking a $3,000 speaker for a local. library.”

The speaker booking business is highly relational, and meeting organizers increasingly want a true partnership with speakers (and offices) invested in their audience.

According to Crystal Washington, a tech strategist and futurist regularly hired to give technology talks, “‘audience interaction’ is a buzzword right now.” In its spirit, it goes beyond the typical Q&A or asking the audience to “turn and talk,” where they share a quick conversation with their neighbor.

“Humans are becoming the cyborgs that 80s movies warned us about,” Washington explains. “Our devices are always with us, so speakers need to stimulate both the biological and mobile brains of their audience.”

In the near future, Washington suggests speakers harness the power of augmented reality, curating their presentations so audience members holding their phones in front of the presentation can immerse themselves deeper into the content. Bluetooth could vibrate phones to alert them to a surprising moment in the story, or a 3D image could appear that is part of the experience.

Washington is already putting the technology into action. “I’m starting to empower my audiences to use their mobile devices even while I’m talking,” she tells me.

When she has a phone-based business, she makes people associate with each other so that, rather than “public on phone” (where people focus on technology), the experience becomes “audience-to-audience-to-lecturer”.

Even as technology advances, it can be used to make a meaningful connection, both with content and with others in the room.

As the speech industry adapts to a rapidly changing landscape, these three strategies can help speakers continue to grow with audience expectations and create more dynamic and engaging content.

Public speaking anxiety? There's a class for that