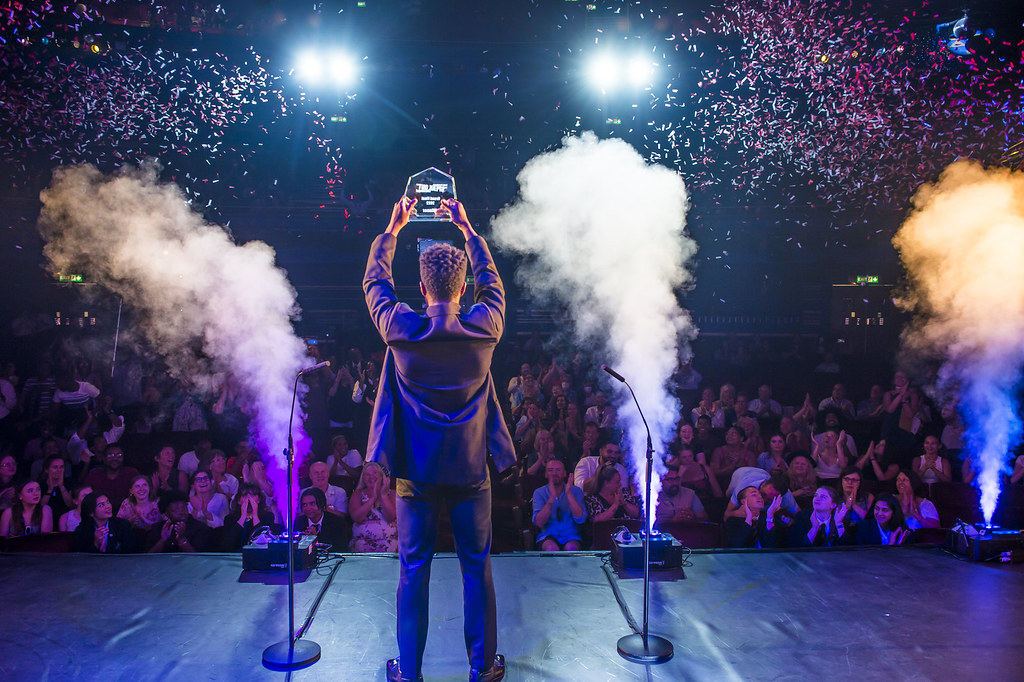 Michael of St Benedict‘s Catholic College, captivated an audience of over 500 at Covent Garden’s Cambridge Theater on July 18, earning him the title of Grand Champion winner of Jack Petchey‘s Speak out Challenge! 2022.

It is the largest speaking competition for young people in the world with over 27,000 Year 10 pupils (14-15 years old) from public schools in London and Essex taking part this school year alone.

Using his natural charm and handcrafted storytelling, Michael entertained the judges and audience while sharing some personally observed truths; “Those who came before me were as strong mentally as they were physically, my ancestors. 400 years later, my father arrives in England, a fighter…carrying resilience in his left hand and courage in his right.

The grand final jury that declared Michael the winner was made up of a mix of award-winning journalists, high-profile businessmen and celebrities, all known for using their voices to make a difference:

Watch and use Michael’s winning speech, “I am a fighter”:

Michael will receive £2,000 for himself and £3,000 for his school, St Benedict’s Catholic College, to spend on a project of his choice.

Before receiving the title, Michael explained why he had chosen to speak out on this subject: “There are two reasons. First, because my heritage is very important to me and I wouldn’t have talked about anything else.

“The second reason – because of the stigma attached to immigration. I talk about my father in my talk as an immigrant to shed some light on why people immigrate. It’s not like he couldn’t have lived a good life in Nigeria. He graduated from college, made decent money. But he knew he was destined for more than “decent”. Immigrants don’t leave their whole lives behind them to come and steal people’s jobs in England.

After being crowned Grand Champion, Michael added, “Thinking back to the first time I did the workshop they told me I had to give a three minute speech, I didn’t even think that was it. was possible. To stand there (on stage) with 14 of the best speakers I’ve ever met, there are no words to describe it, it was amazing, it was amazing. I hope I can come back here and judge, I fell in love with the competition and all the talk I heard. I could explore public speaking.

Izzy shares her personal experience of her tic disorder. She explains, “I refuse to let something as simple as a troubled tic get in the way of my life, because tics aren’t always Tourette’s, they’re not a social video to make fun of. , they are part of who I am.”

At the end of the event, Izzy said, “I’m very happy to have participated in the Speak Out Challenge, to have come second and to show my personal development. To be able to go on stage and give a speech about something as personal as twitch is fantastic.

Watch Izzy’s winning speech, “A Pain in the Neck”:

Grace said: “It’s absolutely amazing! I never thought something like this would ever happen, it’s so surreal! It taught me a lot about confidence, standing up in front of people and not being afraid to use my voice. A workshop at school turned into a huge stage in the West End, it’s absolutely stunning.

Watch Grace’s speech, “Do I need a longer skirt?” :

Fourth place went to Maya Redley from Leytonstone School in East London. Maya’s speech challenges the standards of beauty set in the films of her childhood.

Maya said: “To be here 4th out of 27,000 is insane and to have this opportunity to share what I had to say and have people actually listen to me is so special. It has given me confidence now that I am approaching things, I don’t question myself so much anymore and it showed me that I can do it, if I put my mind to it, I can do anything!

Which public sector workers in Scotland are getting a pay rise?