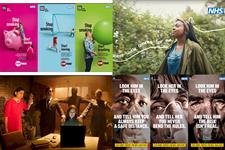 Public Health England’s last hurray, on the eve of ceasing to exist in October, was to celebrate the success of its Stoptober campaign – which celebrated its 10th anniversary this year – with an infographic animation designed by Freuds.

Stoptober was launched in 2012 and has helped over two million smokers in England kick the habit. This key message from the animation is accompanied by a warning that much more needs to be done, with smoking still killing 75,000 people in England each year.

The latest iteration of the campaign focuses on the benefits of quitting smoking, such as being able to breathe easier and saving money.

Grieving mothers whose sons had lost their lives were at the heart of an emotional campaign by the Metropolitan Police and Crimestoppers urging people to provide information about knife crime.

In a series of shorts, the women relive the aftermath of their children’s murders – and recall the first calls they made after hearing the news.

The campaign’s key message was that while picking up the phone from Crimestoppers can be difficult, it could save someone else from having to make a much more difficult call after the death of a loved one.

The campaign used a mix of traditional and social media channels, as well as internal communications, collaboration with partner organizations such as charities and local authorities, and influencers.

Look me in the eyes

Visually striking images of doctors, nurses and critically ill coronavirus patients have been used in an emotional plea for people to stay home. A film created for the government by Freuds features close-up views of hospital staff and sick patients staring at the camera and pleading with people to follow government advice.

The campaign reveals the emotional and physical toll COVID-19 takes on medical teams and the people they care for, to highlight the importance of staying home to help stop the spread of the virus.

Think before you link

Concerns over attempts by foreign spies to recruit Britons online prompted a campaign by the Center for the Protection of National Infrastructure – an arm of MI5 – to warn of the danger. The campaign, which was aimed primarily at civil servants and other officials, urged people to report suspicious profiles and remove them from their networks.

A campaign film shows a civil servant approached online to be a keynote speaker at a ‘prestigious conference’ where he will receive an ‘attractive honorarium’ and all expenses paid.

Dark figures are shown clutching the official and his colleagues. And the voiceover warns: “Connecting with profiles you don’t know can have unintended and damaging consequences.

Why settle for one British star when you can rally two to your cause? NHS England has successfully featured Sir Elton John and Sir Michael Caine in a tongue-in-cheek short film encouraging people to get a coronavirus shot.

The film takes on the style of an audition video, with John attempting to land a role ahead of the campaign. After failing to impress, he attempts to impersonate Caine. The ad ends with Caine telling viewers the vaccine ‘didn’t hurt’ – adding his famous catchphrase: ‘Not many people know’.

Lord Ara Darzi commissioned the film, which was shot in Chelsea and Westminster Hospital. The NHS did this internally and launched it on social media and on its own website.

The latest iteration of the long-running Every Mind Matters campaign, designed by Public Health England, was launched by PHE’s successor body – the new Office for Health Improvement and Disparities – in October.

The campaign is designed to empower adults to improve their mental well-being ahead of the winter months. It’s backed by celebrities such as Stephen Fry and Great British Bake Off winner Nadiya Hussain sharing their experiences of mental wellbeing in hopes of encouraging the public to take care of their own. People are encouraged to get a free NHS-approved mental plan from the Every Mind Matters website.

The multimedia campaign is an inter-agency collaboration between M&C Saatchi, Wavemaker, OmniGOV, Freuds and 23red.

Click here to subscribe to the FREE Public Sector Newsletter to receive dedicated public sector news, articles and commentary straight to your inbox.