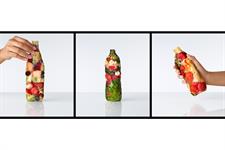 Scheduled for the 2021 COP26 climate change summit in Glasgow, Zero Waste Scotland has launched this campaign to raise awareness of the fight against food waste and its crucial role in the climate crisis.

With around 600,000 tonnes of food waste each year coming from Scottish households alone, the multimedia campaign aimed to highlight the problem to ordinary citizens – with attempts to change mindsets about how food waste was more damaging to people. environment than plastic waste.

With this in mind, the campaign provided statistics showing that just 1kg of household food waste was equivalent to the landfilling of 25,000 500ml plastic bottles.

The campaign used visuals of food waste in the form of plastic bottles, created in partnership with famed photographer Rankin – focusing on shocking statistics related to food waste.

Photographs were circulated via a footpath in Glasgow city centre, on social media and via PR at the time of the summit, reaching over 1.3 billion people around the world with the campaign’s message on the impact of food waste on the planet.