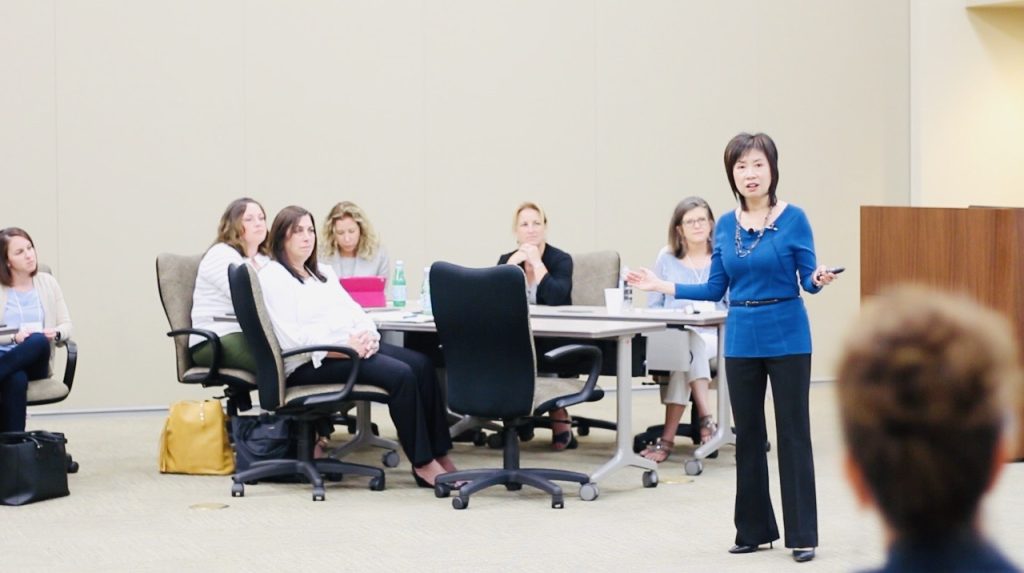 According to Alice Tang, achieving your goals starts with a positive attitude, a message that the financial advisor shares with every public speaking engagement.

And just as she achieves great things from her tiny frame, her public speaking messages begin with recognizing the power of starting small.

When she and her husband moved to the West Coast of the United States nearly 25 years ago, Tang’s ability to stay was directly tied to her husband’s job.

“I didn’t have my green card,” she says. “I had to face the four walls of my house, feel sorry for myself because I thought I depended on my spouse even though he loves me.”

So she started to focus on what she could accomplish.

She invested herself in the management of the house and in preparing for the future. She compared credit card rewards programs. She investigated the interest rates on various loans. She researched how to save money, spend more wisely, and get the most out of every purchase.

“I realized that was what I could do,” Tang said. “I was planning for the future. Save it and let it grow.

The power of connections

Then there was a turning point. Through casual conversation, she learned that dollars invested in a 401K plan can save on taxes. The couple’s accountant never shared the idea.

“I confronted the CPA, ‘Why didn’t you tell us?'” she said, saying the company should have been proactive in helping her and her family to prepare for their financial future. “They weren’t helping us. We were a new couple, we were immigrants and the wife was not working yet. Maybe we were too small, but they should have known.

She took her business to another accounting firm, after doing her usual research.

In the end, a little.

She earned a degree in international management, building on her multilingual talents. However, she didn’t want to take a job if it meant more time away from her husband. He was already away from home several months a year for work.

“It didn’t make sense for the wedding,” she said. “Marriage was my priority.”

Combining her previous successes, she passed an interview with a financial consulting firm. She accepted a position without realizing that the salary was only commission.

Her first year, she earned $2,000 in commissions. It jumped to $8,000 the following year and kept climbing.

“Success is a journey,” said Tang, who is now a partner at the same firm. “For me, it’s a never-ending story, because I never thought about quitting.”

Quite the opposite, in fact.

She focused on developing her skills and building trust, business and respect for her clients. Tang applied a handful of lessons learned from his parents as his client list began to grow. His mother was a saver, guiding the family’s spending and purchases with a forward-looking eye and a flair for the best value. His father forged his own path in the printing industry.

Following their example, Tang seeks more intangible goals when entering into a relationship with a client. She tends to initially discount goals such as a $5 million nest egg at age 60. Instead, she looks at how those dollars will be spent.

“What do you want to do with your money is the question behind my questions,” she said. “These are emotional decisions. Wealth management is more than money. For me, the most important thing is to know why you need money. You should know why.

Getting to the underlying emotions, Tang asks three questions when interviewing a potential client to determine the best way to engage with both the person and their goals.

“With each of these conversations, everyone will have some kind of light bulb moment,” Tang said. “It comes down to why they want to have some wealth.”

With the basis of why, Tang helps his client build an investment strategy designed to achieve financial goals while acknowledging emotional reactions.

As his client list continued to swell, his network of personal and professional connections also grew. The first time she spoke in public happened almost before she realized what was happening. She said yes to a friend’s request to talk about her approach to wealth management before she even knew what she would talk about or how she would organize her post.

“There is a saying,” Tang said. “When the student is ready, the teacher shows up.”

Another friend with Dale Carnegie’s background walked her through the prep work, offering presentation ideas and organizational suggestions along the way. She remembers the first conversation being a bit difficult, but she kept going, excited at the prospect of helping people find their personal successes.

His first appearances in public were the first small nibbles of the entrepreneurial bug, born out of a desire to help others achieve their wealth goals. Since her first event, she has spoken to tech groups, manufacturers, construction companies, and more, focusing on her message about women and wealth.

“I’m not just talking about the money,” Tang said, saying she takes a holistic approach to her clients and her public speaking events. “It can be wealth however you define it. A wealth of relationships. A wealth of health. A wealth of community.

She’s moving even further away from public speaking, with the soon-to-be-launched Women’s Million Dollar Conversations, a series of interviews with women who have reached a million-dollar goal. whether it is a business agreement, an annual salary or a company. idea.

“I think an entrepreneur is someone who has an idea that they are so passionate about that they are willing to take risks to be in control of their own destiny,” Tang said. “I am responsible for my who, what, why and how.”

She takes her definition one step further, saying her approach to the idea of ​​entrepreneurship leaves something behind for the next generation and beyond.

“The thought I have is ‘beyond this life,'” Tang said. “Creating something, a product or a service, that goes beyond your life.” I also think that women should own their own future, their own sky. That’s why I advocate for women to be in charge of their money. This is my goal as an entrepreneur.

5 ways to make your story count when speaking in public

10 Online Public Speaking Courses to Boost Your Confidence at Work