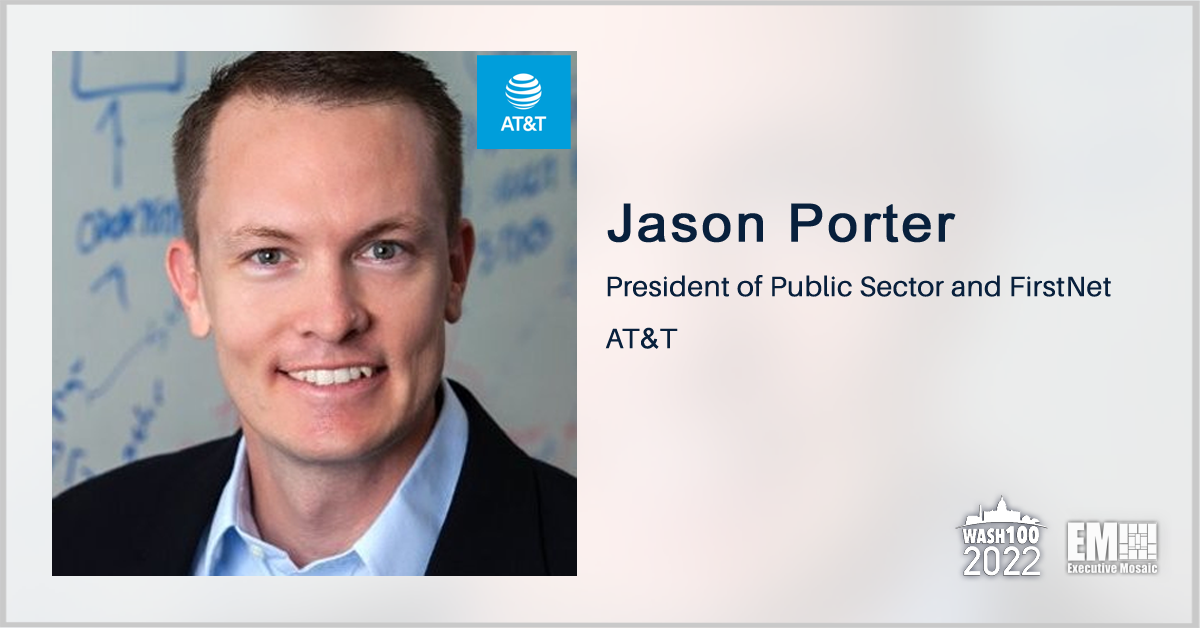 Executive Mosaic is honored to recognize Jason PorterChairman of the Public Sector and FirstNet at AT&T, as 2022 Wash100 Recipient of the award, for leading significant company growth, with FirstNet being able to reach over 99% of the US population and 95% coverage of Band 14 in the past five years alone.

Additionally, Porter received the highest award in government contracting (GovCon) for piloting 5G capabilities for federal agencies as well as the education market, and for its focus on support and providing mission-centric products for public safety entities. Visit Wash100.com to vote for Jason Porter as one of your TEN votes to defend your favorite leaders in the federal and GovCon sectors.

Most recently, AT&T and FirstNet announced the expansion of the company’s 5G availability to 10 new locations across the country, which covers more than 2.81 million square miles, including Savannah, Georgia; Minneapolis, Minnesota; Charleston and seven other key cities that will have access to 5G service.

“Interoperable connectivity is the foundation of FirstNet and the entire public safety-focused ecosystem it drives. As a partner in public safety, we moved faster than anyone to provide greater coverage in tribal, rural and urban areas, powering the connections that first responders rely on most,” Porter commented.

During his recent Executive Spotlight interview with GovCon threadPorter discussed the impact 5G capabilities are having on the federal sector as well as how they are used in many ways by federal agencies.

For example, the 2022 Wash100 winner pointed out that some agencies are using 5G to support experiences and use cases such as remote operations involving drones. There are examples of multi-access edge computing, where the network also provides cloud capabilities from the nearest point of presence or network hub.

“5G supports real-time computing capabilities. Robotics is also a huge opportunity for 5G capabilities. We are also seeing a considerable amount of use case development for 5G in education. I believe 5G can revolutionize education; It’s already happening at the university level…

Institutions like the University of Missouri are studying how 5G can help reduce energy consumption and emissions and reduce greenhouse gas emissions from manufacturing. 5G is a crucial ingredient in research and study for education. 5G leads us into the future.

You can read the full Executive Spotlight interview with Jason Porter at GovConWire.com.

Besides, AT&T FirstNet unveiled and launched the Band 14 spectrum, a line created especially for the FirstNet Authority organization for emergency calls. AT&T FirstNet also attempts to combat weather challenges and climate events by adding a third lane to each of the network’s mobility hubs for emergency purposes.

A few months earlier, AT&T had announced that the company was providing first responders and security personnel at Redstone Arsenal with a wireless and secure communications network through the installation of FirstNet Cell Sites for the US Army in Huntsville, Alabama.

Porter commented in December when news broke that FirstNet sites are being built using Band 14 spectrum as well as commercial AT&T spectrum.

In October, Jason Porter and AT&T announced that FirstNet had officially connected more than 18,500 public safety agencies to its network, which represents more than 2.8 million FirstNet Connections across the United States. Porter said his team will continue to develop new products and augment existing ones to meet the information needs of public safety entities.

In addition, FirstNet had also deployed over 650 emergency response-focused products and services as of October 2021. This includes FirstNet’s satellite cell on light trucks or SatCOLTs.

The public safety network will also offer new mission-focused products: the Locate Standard mapping app and NumberSync, which allows responders to digitally pair smartphones with Samsung wearables such as smartwatches.

Visit Wash100.com vote for Jason Porter and who you believe deserves to be recognized as the most important leader in the GovCon community and the federal landscape.

Executive Mosaic is proud to recognize AT&T and Jason Porter for being named recipients of the 2022 Wash100 Award. As the inaugural recipient of GovCon’s most coveted award, Porter has demonstrated a level of success and recognition that can only be recognized by the Wash100 award and the GovCon community.

Video of the day

It's time to make the change