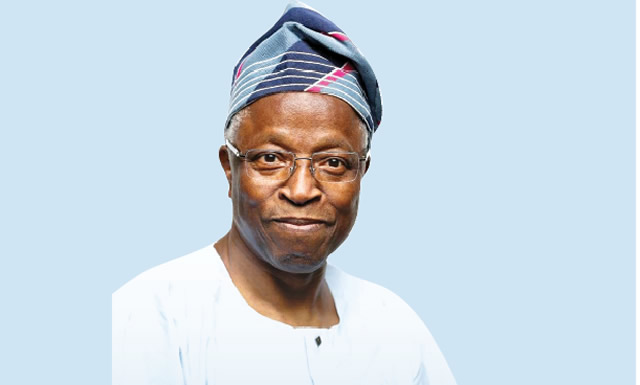 The the memories I have of Professor Ladipo Adamolekun constitute some of my most precious personal and professional memories. These are memories that I have built up throughout my intellectual formation and my professional maturation. In my long list of scholars and practitioners of public administration and public policy, from Chief Simeon Adebo, Dr Pius Okigbo, Professor Ojetunji Aboyade, Professor Adebayo Adedeji, Allison Ayida to Ahmed Joda, Adamolekun occupies a unique memory space for me. Memories are a meaningful link to our past; a fundamental record of what had happened to us.

That’s why it’s easy to agree with Mattie Stepanek, the American poet, “Keep all special thoughts and memories for lives to come. Share these memories with others to inspire hope and build from the past, which can bridge the future. Celebrating Adamolekun, for me, is a special service to the memory – a living memory – of someone whose scholarship and public service speaks significantly to the trajectory of public administration in Nigeria. He is a true embodiment of what once was. My mission in this piece is therefore to share my understanding of how this worthy patriot contains within him a bridge to the future.

An important dimension of my memories of Professor Adamolekun is linked to his supervision of my doctoral thesis. Around the year 2000, my second chance to enter a doctoral program was at a point where the need to travel back and forth to Zaria required by my professional responsibilities as a bureaucrat weighed heavily on her. At this point, my supervisor at Ahmadu Bello University, Zaria, Kaduna State, the late Professor Andrew Ohwona, had moved to Delta State University. It was also a period, at the Federal Ministry of Education, when I was at the forefront of initiatives to re-establish the National Open University of Nigeria. And with the opportunity I have had to undertake study visits to more than half a dozen open universities around the world, I have already had the idea that the relocation of my doctorate in an open university would free me from the need to travel, and therefore to drop out of the program. again and again. Of the many open universities I contacted, I opted for the Commonwealth Open University for a variety of reasons, primarily their acceptance that I could continue my work at ABU. Subsequently, Professor Adamolekun was chosen as my supervisor, among several names proposed to the university. It was good fortune for me. As the historical trajectory of public administration represented by my doctoral dissertation is embodied in Adamolekun’s career in public administration.

When Adamolekun started teaching, his theoretical positions quickly caused consternation, and he immediately recognized him. Of course, it was a parting moment for everyone involved. But he was not discouraged. The need to bridge the theory-practice gap led him to seek integration into the civil service and its bureaucracy. His internship between July and December 1973 in the Benue-Plateau State Civil Service was the start of his excellent public service which took him from the United Nations to the World Bank and back to Nigeria.

Barely a year after taking office as a public administration officer at the UN, the then Dr Adamolekun was recalled by the new VC in Ife, the late Professor Aboyade, to become the Chief of the new administration department. And he was willing to cut short his plum date in New York to come back and serve the college. It was the making of a patriot. The Department of Public Administration has provided the right atmosphere for Adamolekun to pursue a brilliant and innovative career in research. Indeed, like the academic pioneers, it has also become innovative not only in the publication of original articles but also in the promotion of specific lines of research for the teaching of administration. For example, his comparative experience in researching his dissertation at Oxford provided him with a distinct advantage in combining research and teaching, especially since he had also had a stint in public service. Thus, his advocacy of the ‘case method’ approach (leading to the publication of the Ife Case Studies in Nigerian Administration, 1975) became epoch-making.

I should consider myself one of those who benefited from Adamolekun’s immense mental greatness and professional insight. His critical positioning as a public sector specialist at the World Bank proved extremely useful when I became the Technical Officer for the Reform Strategy Project in the Office of Management Services of the Presidency in 2002. Of course, he was obvious that such a huge project needs expert input from the World Bank, and Adamolekun, along with Professors Dele Olowu, MJ Balogun, Tijjani Bande and Victor Ayeni, were around the corner, providing the necessary technical support. needed by the project. He also played a key role in technical leadership, through the UK Department for International Development in 2009, for the review of the pilot implementation of the same project. The success of this strategy would eventually blossom into the National Civil Service Reform Strategy which became the benchmark and irreducible blueprint for reform in Nigeria.

Management; as well as CAFRAD – the continental research center of excellence based in Morocco, the African Union Conference of African Ministers of Public Service, the African Capacity Building Foundation based in Harare, and even the International Institute administrative sciences in Brussels. And this is strategic for his mentoring capacity, as communities of practice have highlighted his many credentials, from research to professional skills.

That’s why it gnaws at me terribly most of the time that NAPAM who once owned Adamolekun, Balogun, Olowu and many others; the professional community that once housed the bigwigs of public administration and provided the forum for mentorship of scholarship and expertise is dead and critical stakeholders and the community of practice and service see nothing of it wrong. It’s a forum that could turn into a generational game-

change in public administration in Nigeria, especially in our collective struggle to overcome clerical pathologies and dysfunction in the civil service, and make it the institutional starting point for making the Nigerian state a true development and actor worthy of the fourth industrial revolution. Indeed, as I mentioned earlier, Adamolekun has given his immense stature and attention to institutional reforms, including community of practice. We both assembled a 2-person expert team once, in 2007, to review the status and functionality of civil service management development institutes, including the Administrative Staff College of Nigeria, Topo, Badagry, the Center for Management Development, Lagos, and the Civil Service Institute of Nigeria. The objective was to examine the overlaps in the areas of their training programs.

This is to establish the core domain of each and recommend how the delivery of their training services could be mutually reinforcing to enable economies of scale to benefit public sector institutions, and thus the effect of driving human capital development on the national economy. .

Explained | Why are companies in the Indian region seeking funding from the non-public sector?