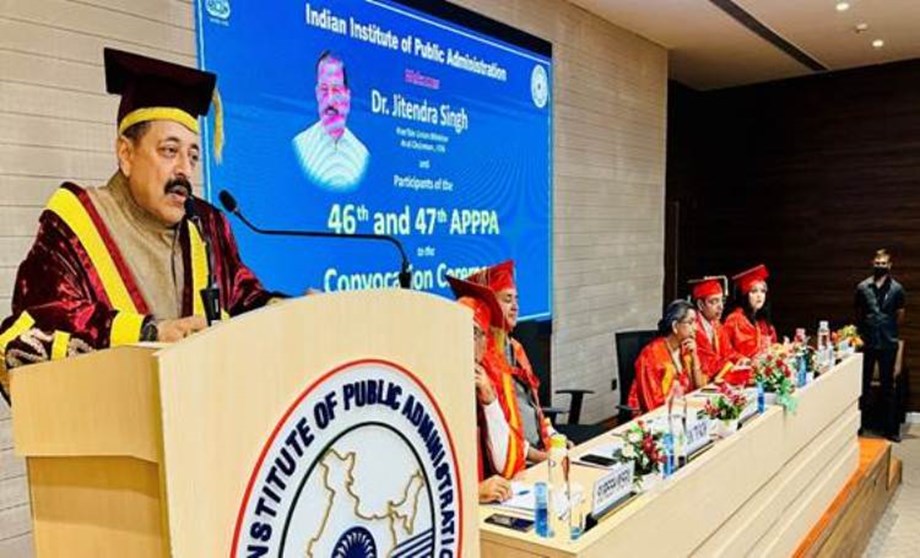 Speaking at the convocation ceremony of the 46th and 47th Advanced Professional Programs in Public Administration (APPPA) in New Delhi, Dr. Jitendra Singh said that current challenges also require a healthy mix of civilian and military disciplines and an integration of further and further coursework is required.

Earlier, Dr. Jitendra Singh presided over the signing of a Memorandum of Understanding between IIPA and Bhaskaracharya National Institute for Space Applications and Geoinformatics, BISAG-N for the preparation of the Mentoring Module of civil services. SN Tripathi, Managing Director, IIPA and Shri TPSingh, CEO, BISAG-N signed the agreement. The minister also released a report on socio-economic assessment of SAP in India.

Addressing the Convocation, Dr. Jitendra Singh noted with satisfaction that the APPPA course has undergone changes and new areas like Atmanirbhar Bharat and Mission Karmayogi, apart from other important government initiatives, have been covered. He said it makes the course more relevant and useful and it gave good exposure to rural and urban development projects. It helped the agents to better understand and appreciate the different socio-economic devices, added the Minister.

Dr. Jitendra Singh said exposure to overseas training has some merits, but administrators need to focus on finding Indian solutions to Indian problems. He also recalled that the IIPA has been resilient enough to overcome the precarious situation of the pandemic and to dispense with the conventional mode of face-to-face training, but there has been some mixing whenever the circumstances demanded it.

The Minister said that the 47th APPPA, besides the number it bears, had many more meanings because it became the first group in the history of the IIPA to attend the oration of a special address by the serving leaders of the three wings, i.e. the army. , Navy and Air Force. The 47th Advanced Professional Program in Public Administration (APPPA) has come to an end after 10 memorable months.

Referring to the dramatic and visible change in working culture since May 2014 when Prime Minister Narendra Modi took office, Dr Jitendra Singh highlighted several original decisions, such as the removal of the old practice of obtaining attested documents by an official. and replacing this with self-certification, eliminating interviews for lower-level selections, and abolishing over 1,500 outdated rules/laws.

The Minister was informed that during the 46th APPPA course, participants had the opportunity to visit Gujarat, Sikkim, Darjeeling as part of their visits to rural, urban and advanced areas and IIPA organized lectures and special interviews on highly relevant topics of the Indochinese border. Conflicts, Indo-Pakistani relations, strategy of the Karmyogi mission and the FRAC, new education policy, etc. who enriched the knowledge of the participants in the 46th APPPA.

The APPPA course began in 1975 and was the first of its kind in the mid-career training segment designed for mid-level civil servants and defense force officers. Approximately 1600 officers have taken this course since 1975 and this program has been the IIPA’s flagship program.

APPA covers a variety of topics useful for mid-level officers to prepare them for more responsible leadership and decision-making positions. It includes a wide range of modules ranging from public administration, finance, digital governance, cybersecurity, agricultural economics, urban governance and consumer protection to environment and climate change and social systems.

Public speaking and work experience could contribute to CAO points