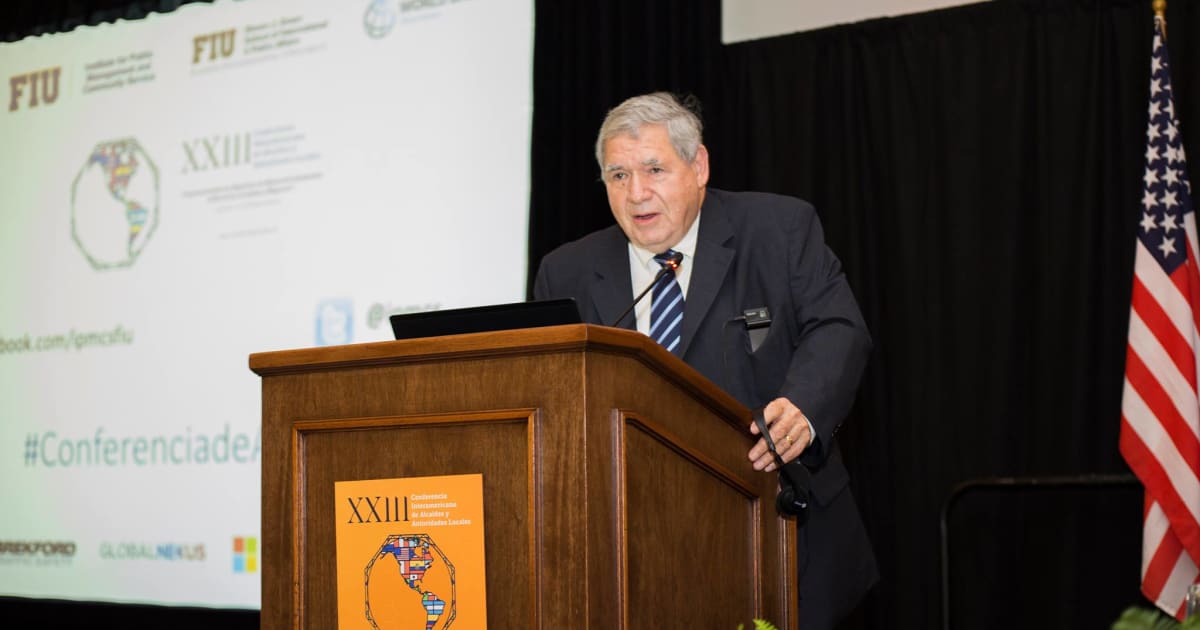 CRF professor Allan Rosenbaum is the third person to be elected to a second term as president in the 81-year history of the 8,000-member American Society for Public Administration (ASPA).

Rosenbaum is the founding director of the Institute for Public Management and Community Service (IPMCS) and the Center for Democracy and Good Governance, both of which are part of the Steven J. Green School of International & Public Affairs at the FIU.

He is the recipient of numerous awards from major international organizations for his efforts in building democratic institutions in Latin America and Central and Eastern Europe.

Five years ago, Rosenbaum served a one-year term as ASPA President in which he “began the process of evolving the organization into a more vigorous advocate for a stronger public sector. strong in the United States ”.

Rosenbaum will serve as president-elect for one year, starting in April 2020, and will assume the presidency from 2021 to 2023, making him the first president of the association for two years. This was made possible by a recent change in the statutes of the organization.

“When I realized there was going to be a two-year presidency, I decided it would give me a bit more time than the first time I was elected in order to better institutionalize the efforts of the ASPA to reach out to other organizations concerned with building a stronger public sector and to help form the coalitions needed to engage more effectively in such efforts, ” he said.

To do this, Rosenbaum said it would be important to “seek, for example, foundation funds to support advocacy efforts, including possible publicity campaigns, on the important role of government activity in promoting building a strong national economy “.

There are often misunderstandings about what it takes to produce solid economic progress for the country, he added.

“It really does require a strong partnership between the public and private sectors, and over the past 40 years we have really ignored and degraded the role of the public sector. “

According to Rosenbaum, this stems from a long history in the United States of doubting both the importance of government and its ability to function effectively. This has characterized the last four decades where it has been politically fashionable to say that “taxes are too high, regulations are too strict and this limits the economy and hurts the economy of the private sector”.

However, Rosenbaum points out that during the 1930-1970 period, the United States had the highest tax rates ever recorded in our progressive income tax system, the greatest amount of government regulation, the most militant government in terms of new government initiatives and programs and, as a result, “we have had the most significant four decades of economic progress in the history of the country.”

By contrast, from the 1970s to the present day, he said, there have been reductions in government regulation, tax rates and the overall role of government in the economy, resulting in a decrease of the middle class with declining living standards, including, for the first time ever, a decrease in the lifespan of the average American citizen.

“What this suggests is that the main ideological dogma of the US government since the 1970s, that we must reduce the role of government in American society, reduce tax rates and reduce regulation to generate a better economy. is exactly the reverse of what history shows. works, ”he explained.“ The period when the government was more engaged in the economy, was doing more to support the programs needed to build a strong middle class, etc., was the period in which we had the strongest economic growth. “

Rosenbaum suggests that because of these attacks on the government, many organizations, including ASPA, have curtailed their efforts to build and defend a strong public sector. As ASPA President, he wants to put more emphasis on one of his original goals, encouraging the organization to advocate for and support the revitalization of the country’s public sector.

Such an effort involves many areas, including healthcare, education, housing, transport infrastructure, all of which are crucial components of our society. Rosenbaum said that part of the problem is that people involved in these different sectors are working in their own sphere. He argues that organizations working in each area of ​​activity should come together “and form a more united front in the name of building a public sector that works for all of us”.

“So part of the advocacy for a strong public sector is the bigger question of saying we need an activist government, we need a government that is playing its necessary and very important role in helping to build a good company. “

In addition to advocating for a stronger public sector, Rosenbaum hopes to encourage a broadening of the focus of what is relevant research in the field. Public administration research into better management is essential, but so is serious research into what the role of government should be in American society.