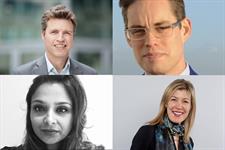 This year has brought major changes in the leadership of communications teams in government, the NHS and the Metropolitan Police.

In what came as a shock to some, Simon Baugh beat his former boss Alex Aiken to the new GCS top position. The former director of communications at the Home Office took up his new post in September, with Aiken remaining director at GCS. Ironically, the new role was created as part of a major restructuring as part of the Reshaping GCS program launched by Aiken in 2020.

She has spent her career to date working in communications within government departments and said, “Joining the Met is a privilege and I’m so excited to be starting. I am passionate about increasing trust in public organizations and using communication to improve and save lives.

“Where better than in an organization fully committed to the safety of Londoners and with a workforce that demonstrates this commitment day in and day out. “

In his new role, Stuart-Lacey manages a team of approximately 90 people for external and internal communications, including a 24/7 press office that handles 1,500 requests per month.

James Lyons landed the best communications job at NHS E&I just four years after leaving a career in journalism and entering public relations. He started as Head of Media and Public Affairs at NHS England before joining NHS E&I as Deputy Director of Communications in December 2019. He was promoted to the most senior post after Simon Enright left for a new position. post of communications secretary to the Prince of Wales and Duchess of Cornwall.

Max Blain rose to prominence in April, when he stepped down as interim chief information officer at the Ministry of Health and Welfare to become the prime minister’s official spokesperson. His responsibilities include briefing Lobby correspondents each morning to make statements on the day’s news on behalf of the Prime Minister. The incumbent is a civil servant rather than a special adviser, meaning Blain is bound by civil service codes on impartiality. The post had been vacant for several months since James Slack, who held the post for almost three years from 2017, became Downing Street’s communications director in November 2020.

Not strictly a hire in the public sector, but a hire that has implications for her. Jack Doyle, who is currently in the spotlight on an alleged Downing Street party last Christmas, stepped down as deputy editor of the Daily Mail’s political team in early 2020 to join Downing Street as a ‘Press officer. Doyle became deputy director of communications and was promoted to the top position after leaving Slack.

Unlike his predecessor, Doyle serves as a special adviser rather than a civil servant.

A senior Downing Street communications source said earlier this year: “He will be the prime minister”. “They added,” The biggest challenge for him now is the strategic negotiation of Whitehall… Will he be able to lift his head and scan the horizon, then start planning six to 12 months out. advance, in terms of communications and with one in view of the next elections? ”

Priya Brahmbhatt-Patel moved to Ofgem in January, leaving her post as Director of Communications at the then Ministry of Housing, Communities and Local Government. She leads a communications team of over 30 people, covering media relations, strategic communications and public affairs, as well as the regulator’s web and digital production.

Brahmbhatt-Patel reports to Ofgem Managing Director Jonathan Brearley. She described the importance of “ensuring that consumers are protected, that they understand the changing energy landscape and that they are reassured that they are receiving the light and heat they need every day, from a affordable and sustainable way ”.

Luke Robinson was appointed director of communications for the cancer charity in November and will start in February 2022. The former BBC reporter has worked at the Department of Justice, as deputy director: strategic communications, since 2017.

In his new role, Robinson will oversee the strategic communications and internal and external communications functions of Cancer Research UK. He will report to Dr Ian Walker, Executive Director of Policy, Information and Communications, who said, “Luke has a passion for delivering positive social outcomes for the organizations he is associated with, and I have no doubts that ‘he will be a valuable asset to us as we look to the future and continue on our mission to defeat cancer.

James Slack quit his post as director of communications for No.10 in March, just months after he got the job. He became associate editor of The Sun, working on the newspaper’s print and digital output and reporting to editor Victoria Newton. Before being appointed director of communications for No 10 in November 2020, he had previously been official spokesperson for Prime Ministers Boris Johnson and Theresa May.

Commenting on his decision to quit government communications, Slack said: “Journalism is in my blood and working in a managerial position at Britain’s most popular newspaper is an ambition I have had my whole life. “

Toby Orr announced his return to the private sector earlier this year as a founding partner of strategic consulting firm Shearwater Global. He had just completed a four-year stint at the Department of International Trade, which he joined as director of communications in 2017 and became the department’s first director of communications and marketing. Prior to working at DIT, Orr spent over a decade in Portland, where he became a senior partner.

In his new role, Orr heads the London office of Shearwater and said the agency aims to “help businesses navigate new loopholes in global politics.”