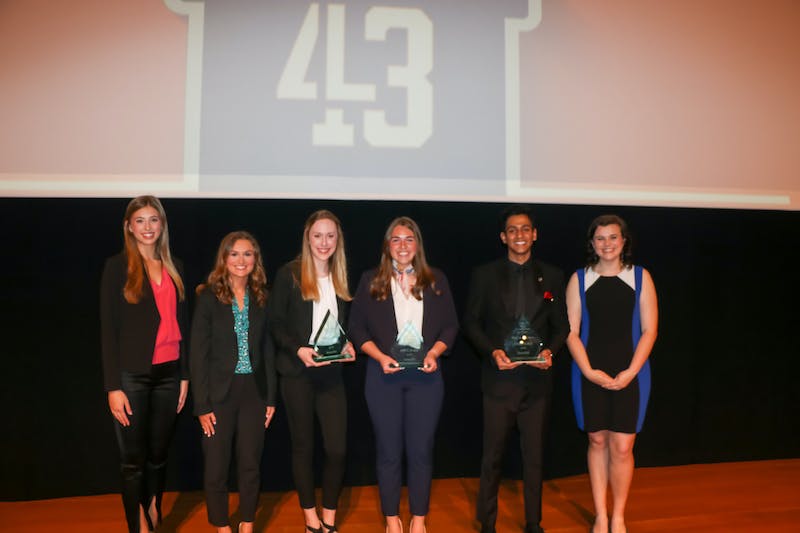 This contest has been at Auburn since March 2017 and was created to highlight the great speeches Auburn students give each semester and to commemorate a former Auburn communications student and football player.

“I had two ideas in mind when I created this competition,” said Jennifer Johnson, director of the public speaking program. “The first was that we could really present and highlight the great speeches that we see every semester, but they just didn’t get any attention beyond the grade they received in class.”

Johnson said the contest was also created in memory of former Auburn student Philip Lutzenkirchen. The prize for the public speaking competition bears his name.

Soon after, the competition received several grants including one from the Lutzenkirchen family who created the Lutz 43 foundation in honor of their son Philip. Now Auburn Speaks is awarding up to $4,300.

“The amount of 4,300 is directly related to Philips’ number when he was playing as a tight end at Auburn, his number was 43,” Johnson said.

Each speech given by the contestants is based on the informative speech they gave in their public speaking class. Students voted to see who in their class will advance to the semi-finals. In the semi-finals, there were 73 students and only six were selected to compete in the final competition.

The first speaker was Saksham Goel, a computer science junior. Goel’s speech focused on blockchain technology, speaking specifically about cryptocurrency and bitcoin. The next speaker was Brooke Gordon, a freshman in the exploratory major, who gave her talk on the topic of rejection (especially in dating) and the types of rejection people face throughout life.

The next contestant to speak was Audrey Osborne, a sophomore accounting student. She gave her speech on how to file your taxes as tax season approaches.

Then Abigail Stephenson, a first-year history student, took the stage and gave a speech about the royal wedding, in particular the wedding of Kate Middleton and Prince William. Stephenson pointed out three main characteristics of marriage; The reunion of two families, fashion and partying.

Once the judges were done deliberating, it was time to announce the winner. Annabelle Lacy and Saksham Goel, respectively, came in second and third place. The winner of Auburn’s public speaking contest was Abigail Stephenson.

Stephenson expressed his gratitude to his public speaking teacher, Rebecca Kitchens, at the Auburn School of Communication and Journalism, and Mike Lutzenkirchen for giving him this opportunity.

Stephenson’s idea for his speech was inspired by his interest in history.

We were talking about the different categories you could give an informational speech about and one of them was events,” Stephenson said. I was like oh perfect, I’m a history student, I can do this. And honestly, it just popped into my head. I was really interested in my subject and I really find the British monarchy so fascinating.

At the end of the competition, Stephenson had the opportunity to meet Mike Lutzenkirchen.

“It really brought the whole night to its real purpose. Ultimately this was started by the Lutz foundation and we wouldn’t be here if it wasn’t for him and the foundation and what they put together. It was a really humbling moment to shake his hand, take a picture with him and say thank you,” Stephenson said.