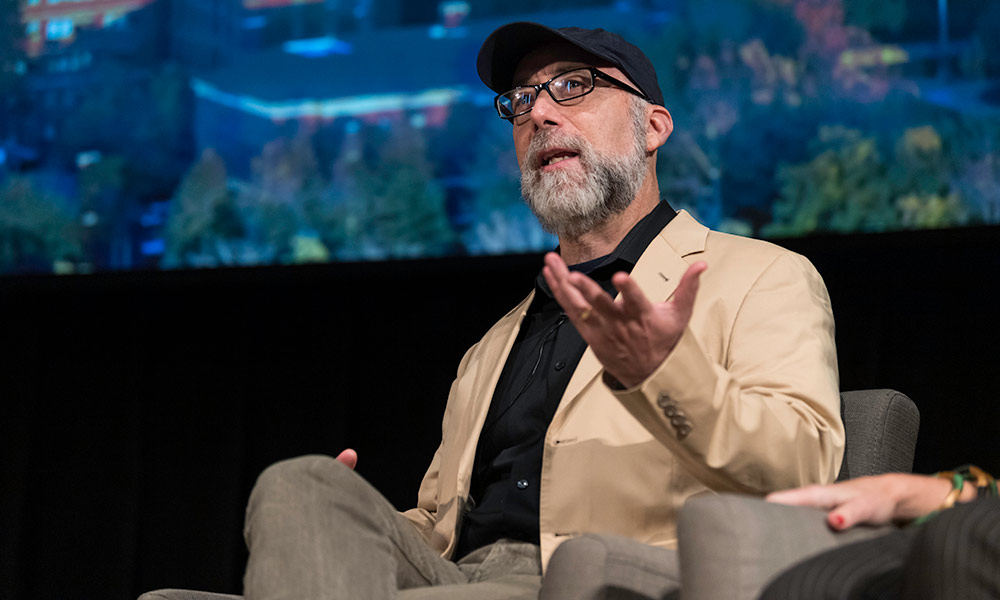 Adam Frank, professor of physics and astronomy, addresses an audience of members of the Rochester community at a 2019 Meliora Weekend University Symposium on the Vital Roles of Creativity and Discovery. (Photo by University of Rochester / J. Adam Fenster)

Adam Frank, Helen F. and Fred H. Gowen Professor of Physics and Astronomy at the University of Rochester, received the 2021 Carl Sagan Medal for Excellence in Public Communication in Planetary Science, presented by the Division of Planetary Sciences (DPS) of the American Astronomical Society. The award is named in honor of the late Cornell University astrophysicist, astronomer and educator, who brought science to millions of people around the world with his PBS series Cosmos and the 1980 book of the same name.

DPS ‘announcement of this year’s Carl Sagan Medal recipients recognizes Frank for “building sustained efforts and solid platforms from which science can be disseminated to the public in an accessible form.”

Frank co-founded National Public Radio 13.7 Cosmos and Culture blog, frequently contributes to the New York Times, and created the Coursera course “Facing the Big Questions: Highlights of Modern Astronomy.”The 13.7 blog, which Frank maintained for seven years and ended in April 2018, has attracted over 13 million visits per year. Frank is a regular on-air commentator on NPR’s news program. All things Considered and contributes to other publications, in particular The Washington Post, The Atlantic, and American scientist.

“Carl Sagan was my hero and my inspiration when I was a teenager, both as a scientist and as a science writer,” says Frank. “His books fueled my passion for astronomy and as I got older I found his imprint on so many subjects that I want to understand. I am deeply honored to receive a medal bearing his name.

University President Sarah C. Mangelsdorf says, “Adam Frank is a tremendous ambassador for research, science education and the University of Rochester. The Sagan Medal is a wonderful recognition of his important work in disseminating scientific knowledge to people of all ages, everywhere.

An “evangelist of science”

A self-proclaimed “science evangelist,” Frank writes and speaks regularly on topics ranging from intelligent life forms in the universe to climate change, from high energy density physics to the importance of science and its funding. . He recently appeared on NBC Today’s show to discuss the science behind alien civilizations and UFOs, and wrote a New York Times editorial on the subject. He has also appeared on CNN, providing live coverage with Anderson Cooper of Jeff Bezos’ maiden space flight.

Frank has received several prestigious accolades for his science communication work, including the Joseph A. Burton Forum 2020 award from the American Physical Society for his “multi-channel promotion of public understanding of physics, science in general, and the relationship between science and society, using methods and venues that effectively engage and provoke discussions among policy makers, scientists and the public on important issues.

He is the author of four popular books defending the beauty of science and against the denial of science. Frank’s most recent book, Stars light (WW Norton, 2018), which NPR viewed as “a valuable perspective on the most important problem of our time,” received star reviews from Booklist and Kirkus Reviews and received the 2019 Phi Beta Kappa Award for Science. In it, he argues that human civilization can survive climate change by learning from the experiences of extraterrestrial civilizations.

Frank was also a science advisor for Marvel’s Doctor strange and appeared in many science documentaries such as Netflix Alien worlds.

The Carl Sagan 2021 Medal will be presented to Frank at the organization’s 53rd annual meeting, which will take place virtually in October 2021.