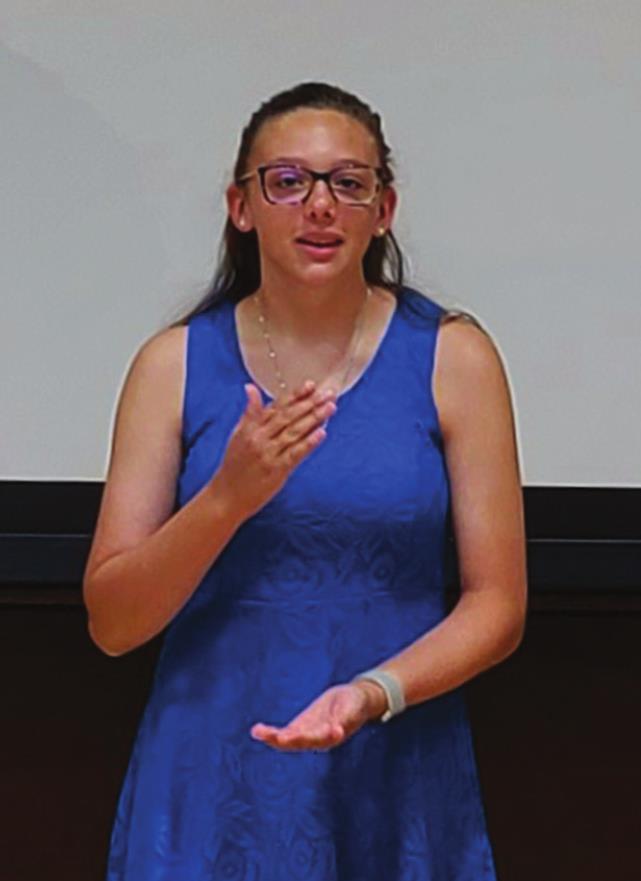 Youth participated in one or more of the following contests: Speech, Public Service Announcement (PSA) or Impromptu Speech. The contest had 185 entries between the three contests.

To enter the 4-H Public Speaking Contest, young people write a speech or record a public service announcement that addresses the subject of 4-H. Young people must qualify in their county’s public speaking competition to compete at the state level.

PSAs are recorded and submitted electronically as an audio file. PSAs must promote 4-H and be general enough to be used anywhere in Nebraska at any time of the year. They are a maximum of 60 seconds long and include a 10-second tagline at the end encouraging listeners to learn more about Nebraska 4-H.

This year’s theme was Opportunity 4 All. Intermediate and Senior PSAs were judged in preliminary rounds and, if they advanced, in a final round. Seventy-seven young people took part in the PSA competition.

Prepared speeches must be original and include 4-H as a main component of the speech. Visual aids and props are not permitted. Time limits are 3-5 minutes for intermediates and 5-8 minutes for seniors.

The impromptu speech contest was launched for the first time this year. On the day of the contest, contestants randomly choose a topic, write a speech in 15 minutes or less, and then deliver their speech to judges and audience members.

Another contest added this year was the video communication contest. Youth create a 60-90 second multimedia piece about their 4-H history. They are encouraged to use sound effects, public domain music and graphics. The top five seniors in prepared speech and PSA were awarded $250 scholarships to the University of Nebraska â€“ Lincoln College of Agricultural and Natural Resource Sciences that they can use if they choose to attend CASNR.

In addition to medals awarded to our top presenters, the Nebraska 4-H Foundation sponsored cash prizes totaling $2,500 for senior participants in the prepared speech and public service announcement. KRVN will broadcast the first, second and third place winners in the senior and intermediate divisions at the Nebraska State Fair.

For more information on the Nebraska 4-H Public Speaking Contest and a full list of results, please visit https://4h.unl.edu/public-Speaking

The fall of the central government and the decentralization of power